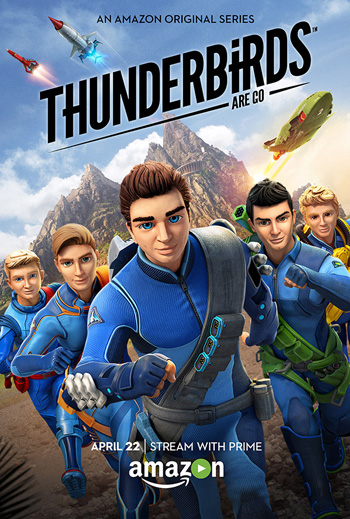 I saw this on Amazon Prime Video a couple months ago. I was surprised that it also is an exclusive to Amazon Video too. It doesn’t have the puppets like in the original Thunderbirds but CGI and maybe some miniatures as sets for wide angle shots. It starts with International Rescue and the Tracey’s trying to stop the Hood, the main villain of the show.

The scenes where the rockets take off are also amazing and almost like watching a real rocket take off. Also the guy with the glasses is called Brains and he’s Indian now for some reason. He even tags along for a bit too in some episodes as well.

I love the retro future this show takes place in,  and it makes it feel almost like the original Thunderbirds at times. You should take a look when you can and have an Amazon Prime Video account. It’s perfect for kids and it isn’t too violent for little kids too so give it a watch when you can.

Last January I bought a Amazon Prime membership since I was surprised at all of the underground movies they had. As well as Blaxplotation Cinema so I decided to watch a blaxploitation movie called Velvet Smooth. When watching it starts of with some random guys in masks beating people up. So this guy call’s Velvet Smooth a lady private eye to figure out who is behind the attacks. The audio and video to this is okay but I think is in mono witch is kinda of bad since it’s like eveyone’s wispering at times. I also won’t tell most of the story since I’m still watching it and also trying to avoid spoilers with these reviews now.

Amazon video said this was digitally restored and I can kinda see it. Still looks like it was from a low budget theater since there’s still some film scratches and dust spots on the film. Those flaws seem kinda down to earth at times. Also these blaxploitation things where the fight scenes are okay and almost every white person is the bad guy I heard almost promoted reverse racism.

Still if you just want to turn your brain off and see a glimpse of the 1970’s underground cinema. As well as most of underground cinema give this a watch on Amazon prime. It’s kinda mostly talking and not as great as some other blaxploitation movies like Coffy. I’ll also soon even do I Coffy review since I’ve seen that and Foxy Brown.