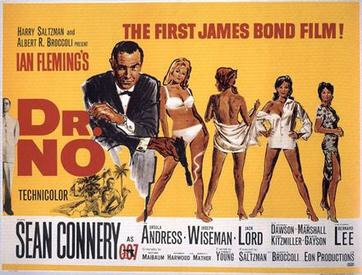 This was the first James Bond movie based on the novels by Ian Fleming. Released in 1962 it stars Sean Conery as James Bond. In this, he goes to Jamaica to find the disappearance of some MI-6 agents. Along the way, he meets some of the locals and a CIA agent there as well. The action scenes are okay but the acting makes up for that here in this movie. Also, these movies show James Bond’s way with the ladies, and this was an era before people used protection and birth control. So some people might question if Bond caught something or got the girl pregnant.

Regardless the middle of the movie introduces Honey Ryder, played by Ursula Andress. She explains that she is trying to find Dr. No herself so she teams up with him and then they get taken to Dr. No’s underground base. After they get scanned for radiation and washed up they’re sent to some guest room. After that, they meet Dr. No who has these pincers for hands, why I don’t quite know but I’m sure the book explains it. Then Dr. No does the whole explain his plan before they kill his pattern and then is sent somewhere. After Bond escapes he defeats Dr. No, activates the self-destruct for the base, and finds and saves Honey. Then after they escape Bond’s American contact find him and Honey and she and Bond celebrate. This movie is pretty amazing and I read the book so this is a pretty good adaption. The sets are creative as well as the locations and Sean Conery is just amazing in these movies.