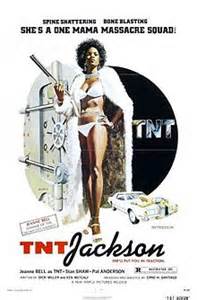 I’ll be reviewing another public domain title called TNT Jackson. A blacksploitation film in 1974 starting a playboy bunny, Jeanne Bell, as TNT Jackson. The movie starts in Hong Kong where her brother gets killed. She then goes to Hong Kong to find out who killed him. Also finds a drug operation going on too.
The fight scenes are okay and Jeanne Bell seems to do a decent job. I’m not quite sure since the audio is pretty bad. It’s in mono so it’s whispering bad at times I can only hear them when it’s quiet.
There’s also a scene where TNT fights topless and keeps turning off a light. Also at the end they go to some place in Africa I’m not quite sure where exactly. Anyway this is a low budget blacksploitation movie so if your into mindless entertainment, enjoy. I watched it for the exotic location of Hong Kong and maybe just for fun. You can also download this as a MP4 for stuff in this link too. Don’t worry since it’s public domain you won’t get in trouble.